On December 15, the first round table discussion took place in Vilnius, which reviewed and evaluated media independence and its objectivity in the countries of the Baltic, Eastern and Central European regions. Media experts from Lithuania, Estonia, Poland, Slovakia, Ukraine, Belarus, Hungary, Moldova, Croatia, Bulgaria and Great Britain attended the event and presented the results of monitoring of their national broadcasters.

During the first part of the discussion, the results of the conducted monitoring were analyzed. It was evident that some countries have a more or less free and independent media and their public broadcaster provides high-quality, objective news based on a variety of verified sources. While other countries have a national broadcaster, which is considered to be more biased, has a lower diversity of sources and usually dependence on government is evident.

In the second part of the discussion the general role of media in our societies was discussed. Experts from Bulgaria, Croatia, Poland, Latvia and Lithuania observed the role of independent media in the processes of public education and the development of democracy, and the importance of stable funding for media content and quality was highlighted.

In the fina part of the discussion, the speakers highlighted the difficult situation in Moldova and Ukraine, the high bias of the media in political affairs, also how the state often uses rigorous control measures not only in media management, but also in other content which is displayed on a television. However, further discussions highlighted that pluralism of opinion and media is important for further developing the foundations of democracy in countries.

The event was implemented by the EESC together with the independent media monitoring organization MEMO 98.

Raigirdas Boruta: On the Path Towards a Formal Alliance? The Sino-Russian “Partnership of Convenience” 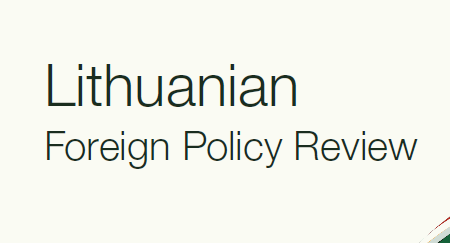