The 2020 Presidential Elections in Moldova

On November 1, 2020, Moldova will hold its 4th direct presidential elections since the country’s independence in August 1991. The date of the elections was set by Parliament on May 21, shortly after the country had emerged from a 2-month COVID-19-related state of emergency. It is worth mentioning that these direct presidential elections are a result of the 2016 Constitutional Court Ruling[2] that cancelled the president’s appointment by Parliament, bringing back the pre-2000 procedure of direct voting by citizens. The electoral period started on August 25, when the Central Electoral Committee (CEC) published the list of 48 political parties eligible to put forward candidates. At the beginning of the electoral campaign in early October, the CEC registered 8 candidates in the following order: 1) Renato Usatîi; 2) Andrei Năstase; 3) Tudor Deliu; 4) Igor Dodon; 5) Violeta Ivanov; 6) Maia Sandu; 7) Octavian Țîcu; 8) Dorin Chirtoacă. One fourth of the candidates are women (Violeta Ivanov and Maia Sandu), and 2/3 are between 40-50 years old.

According to the updated Moldovan State Voter Register[3], there are 3,290,312 million voters, 7.5% of whom are from the breakaway region (249,239 persons), and 7% represent the official emigrant population (230,384 persons). Moldovan voters will be able to vote nationally at 2,004 polling stations (37 electoral constituencies), and abroad at 139 voting sections.[4] [5] In addition, there are 42 more polling stations authorized for voters from the uncontrolled eastern districts (the Transdniestrian region). MDL 21.6 million (around EUR 1.1 million)[6] in expenses have been approved for the organization of the elections. In August, the national body responsible for the epidemiological situation approved the “guidelines” governing protective measures (wearing face masks, etc.) for holding elections during the pandemic.

Trends in the (main) electoral campaigns

The electoral campaigns of the candidates are diverse. Several candidates – Usatîi (EUR 0.3 million); Sandu (EUR 0.08 million) and Năstase (EUR 0.06 million) – have registered significant donations, while two candidates have failed to secure any. Similarly, the latter three candidates have indicated the highest advertising expenses of EUR 0.2 million, EUR 0.04 million and EUR 0.03 million, respectively. In addition, the teams of Sandu and Năstase have spent the most on rallies – between EUR 3-5,000 each. As part of their electoral campaigns, 50% of the candidates have stressed the importance of strengthening the rule of law; 3 candidates listed the whole spectrum of political and socio-economic policies, regardless that the presidential office has limited competences. Half of the candidates have bank assets ranging between EUR 11,000 and 26,000, while 3 candidates have reported having no money in their bank accounts, which seems doubtful. Officially, the richest candidate is Renato Usatîi, who is approaching the EUR 1 million threshold. Of the 8 candidates, two candidates – (Deliu and Sandu) – are using slogans that people’s personal quality, while Țîcu and Chirtoacă have emphasized unification with neighboring Romania. The incumbent president has adopted a slogan intended to unite society/voters (See Table 1 for more details). 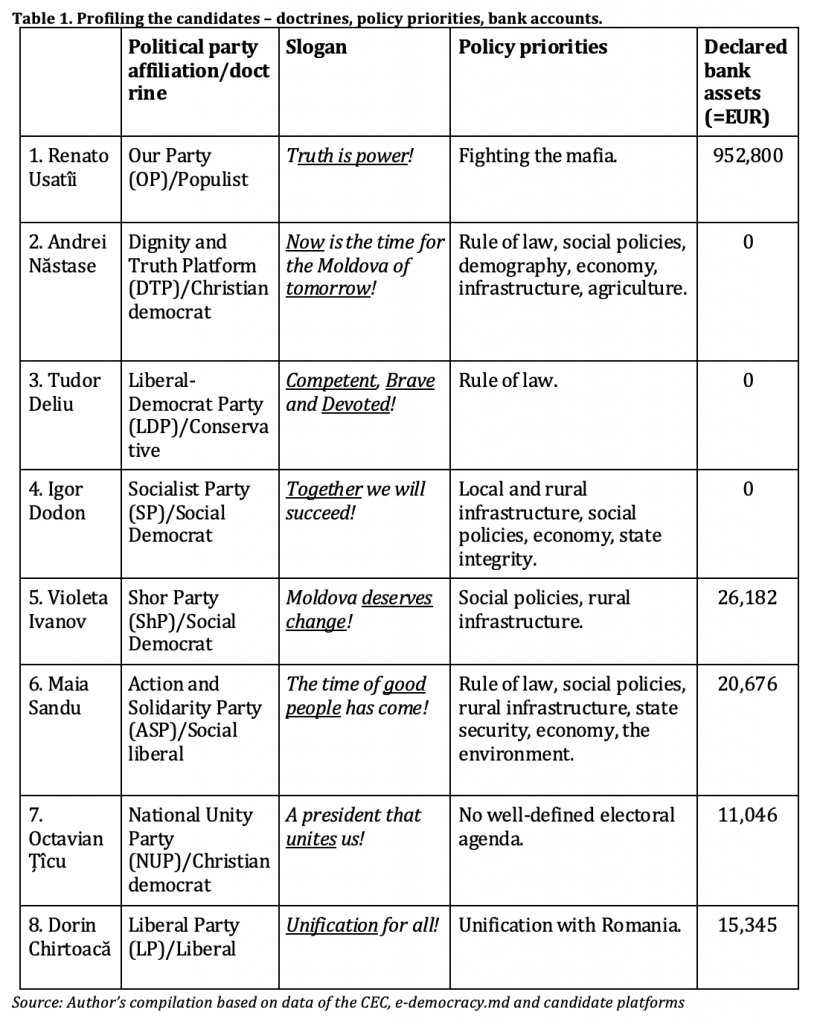 The polls published before October 20 underlined that Dodon and Sandu were the two candidates with the best chances for competing in the second round. Other candidates have almost no realistic possibilities to catch up in the remaining time (See the Figure below). 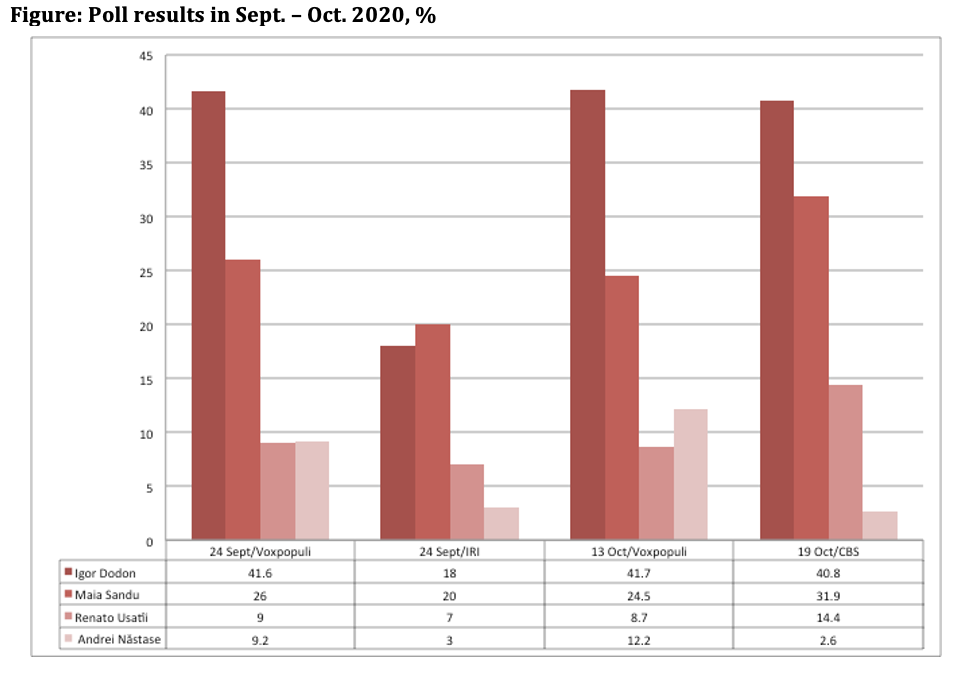 Geopolitical profiling of the candidates – discourse and programsThe latest polls show some growth for Sandu and Usatîi, while backing for the candidacy of the incumbent President Dodon is somewhat stagnating. Two factors will influence the outcome in the first round, as well the final result of the run-off: the mobilization of the anti-Dodon vote and leaks of defamatory information about Dodon and the involvement of his political party (the Socialists) in corruption and collaboration with Russian authorities.

Half of the candidates have adopted a multi-vector foreign policy. Only Dodon is rallying to combine the European vector and deepening cooperation with the Eurasian Union and Russia. The representatives of the opposition, Sandu and Năstase, intend to have a multilateral external orientation, but with a focus on strengthening relations with neighbors Romania and Ukraine and continuation of European integration. One fourth of the candidates are indirectly advocating for unification with Romania, particularly at the level of physical infrastructure, i.e. roads, energy, etc. (See Table 2).

Russian influence on the elections. Source: Author’s compilation based on data from the candidate platforms, e-democracy.md and media reports

Russia’s ability to influence the elections should be neither exaggerated nor underestimated. The only candidate that has open backing from Russia is the incumbent president, Dodon, who frequently traveled to Moscow in 2016-2019. Thus, he established very close relations with Putin’s administration and important Russian state companies (Gazprom).

During the presidential elections, Dodon has received support from Russia in several ways. Firstly and indirectly, he benefits from the media coverage ensured by two TV channels re-broadcasted in Moldova (Pervii and NTV). Dodon’s proxy in the Socialist Party owns the licenses on these two TV channels[7]. Monitoring of electoral media coverage[8] has indicated that these two channels favor Dodon and either neglect or criticize his opponents. Secondly, there have been attempts to offer or promise Russian state aid personally to Dodon (state credit, fuel for farmers), which resemble a sort of geopolitical bribing and image transfer. Last but not least, as the latest journalist investigations show, Dodon is allegedly benefiting from political-technological support from Russian secret services. According to Mikhail Hodorkovsky’s “Dossier” Center, Dodon has been collaborating with various representatives of Russian state institutions and companies, including the Foreign Intelligence Service (CBP), Ministry of Foreign Affairs, Vnesheconombank and Sberbank, among others. Other investigations have proven that the Federal Agency for CIS countries (Rossutridnichestvo) and special services are working closely with Dodon to implement soft power tools of influence.[9] The Russian authorities have even dictated speeches and initiatives for Dodon’s appearances at international conferences. For example, during the 2019 Security Conference in Munich, Dodon presented the idea of a “Big package” for the resolution of the separatist conflict in Moldova. This idea was received from Moscow via the Russian Embassy in Chisinau, as Hodorkovsky’s Center and the investigative journalists from Rise Moldova have shown. Other activities of similar interference from Russian special services may have taken place amidst the current presidential elections. Revelations of Russian interference may explain the recent accusations by Seghei Lavrov (Ministry of Foreign Affairs) and Serghei Narishkin (External Intelligence Service) of US involvement in Moldovan elections intended to bring about a “color revolution” similar to those in Belarus and Kyrgyzstan. If proven, these collaborations are in breach of national legislation on external espionage and treason.

In the run-up to the elections, two candidates appear to have a real chance of facing each other in the final run-off – Dodon and Sandu. The latest polls show that the gap between the two candidates is shrinking. Though Dodon reported fewer expenses for some electoral activities than Sandu, he is supported by media coverage and has benefited from administrative resources. The biggest influence on the elections seems to be coming from Russian authorities, who are backing Dodon against Sandu and other candidates.

[2] Ruling of the Constitutional Court of the Republic of Moldova, March 4, 2016

[5] Pre-registration of Moldovan voters from abroad accounted for about 60,000 people.

[6] The funds that can be used by initiative groups and the candidates themselves throughout the electoral process should not exceed MDL 994,225 (around EUR 50,000) and MDL 18.9 million (around EUR 946,000), respectively.

[7] Between August and October 2019, Pervii and NTV were taken over by the affiliated to Igor Dodon’s entities who are linked to the Socialist Party.

[8] Three reports issued by the Center for Independent Journalism of September 14-28, September 29-October 6 and October 7-14.