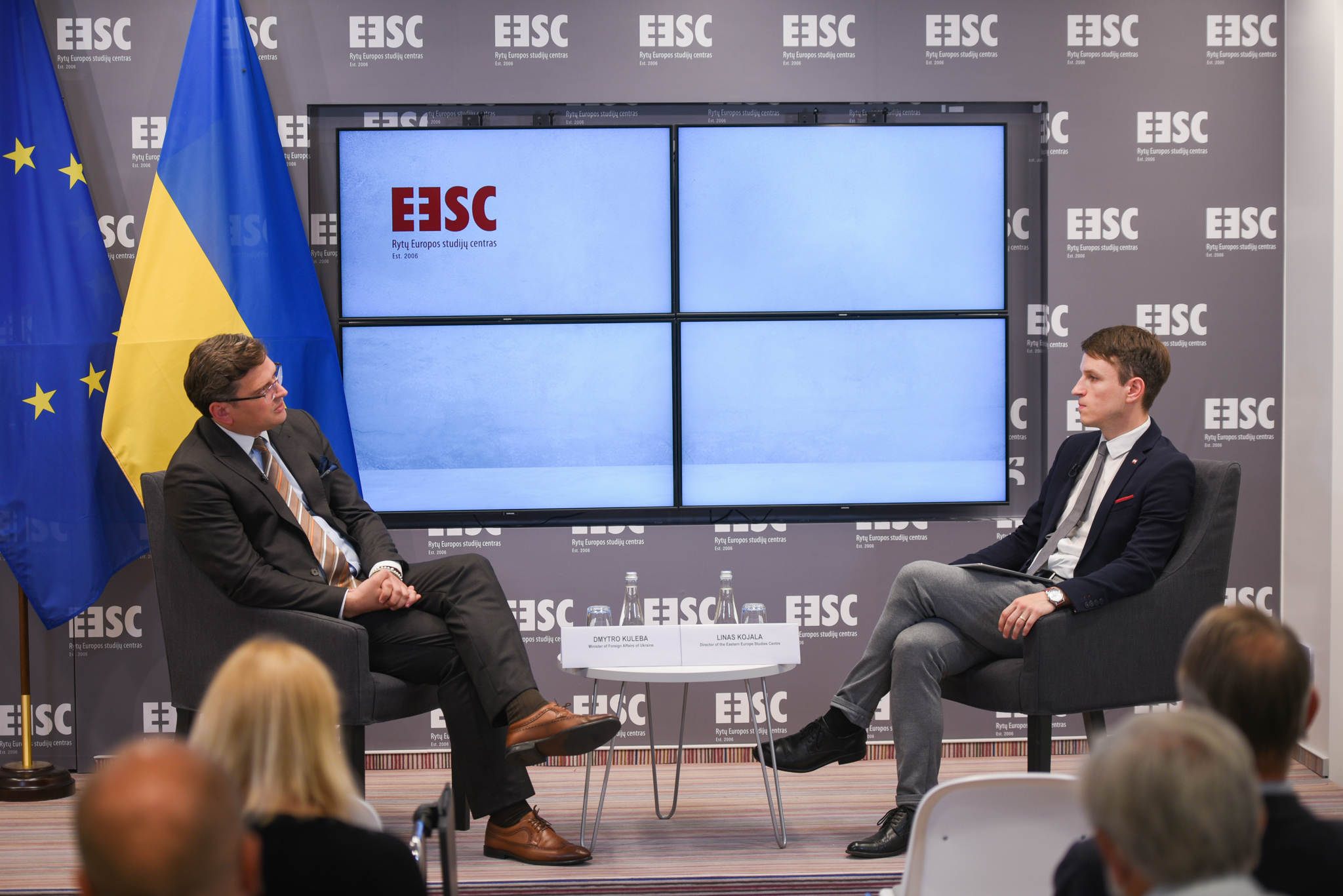 Ukrainian Minister of Foreign Affairs Dmytro Kuleba visited the Eastern Europe Studies Centre. During a discussion, which was moderated by the EESC’s director Linas Kojala, he discussed ongoing reforms in Ukraine, the importance of the Eastern Partnership format, security dilemma and the conflict in Eastern Ukraine, the country’s integration with transatlantic structures and matters of bilateral relations between Lithuania and Ukraine.

At the start of the discussion, the head of Ukraine’s diplomatic corps drew attention to how there are three excellent occasions for the Ukrainian delegation’s visit to Lithuania. Firstly, Ukrainian President Volodymyr Zelensky’s participation in the commemoration of the Lithuanian King Mindaugas Coronation Day. Secondly, the Ukraine Reform Conference, which is held in Vilnius and thirdly, the Lublin Triangle meeting.

The discussion’s moderator Linas Kojala observed that reports from the European Union indicate that over the past few decades, Ukraine has made great strides toward European integration. Dmytro Kuleba pointed out that “The EU’s political culture is based on a critical perspective on what is happening in the international arena and so, it is crucial to see not only strengths but also weaknesses.” Unfulfilled reforms, including judicial, state company privatisation and energy sector ones, are, according to the minister, especially problematic.

“I think that the greatest and most important structural reform that must be implemented in Ukraine is judicial reform. Such reforms are never simple,” Kuleba said. The minister noted that judicial system reform is the main challenge Ukraine faces today.

When asked whether support from partners in the Western bloc is sufficient, the head of Ukrainian diplomacy conceded that “some of our partners are trying to use the reforms ongoing in Ukraine in an effort to conceal their own unwillingness or inability to act.”

Linas Kojala drew attention to how the Ukrainian Constitution clearly outlines a Euro-Atlantic integration path, but according to Mr Kuleba, “Since the 2008 Bucharest Summit, during which it was clearly stated that Ukraine would be accepted into the EU and NATO, nothing was done to accomplish this goal.”

“We in Ukraine are prepared to work in this direction, but we also need our partners to be respectively inclined,” the Ukrainian minister stated. Mr Kuleba stated he is certain that his country will become a member of the EU and NATO – even over the coming decade. “I am absolutely certain regarding NATO, but it might be a little more difficult with the European Union,” he noted.

The discussion also touched upon the topic of the Russian threat. “Russia is the elephant in the room. Everything happening in the political realm has to be perceived through the Russian prism,” the head of Ukrainian diplomacy observed.

“Unfortunately, we, Ukrainians and other European nations, must pay the price for the West failing to suitably react to Russia’s actions. Russia understands only one language – the language of power,” the Ukrainian foreign minister stated. “The strategic exercises Zapad 2021 continue. Despite the announced withdrawal of the Russian armed forces, around 100,000 Russian troops remain in Eastern Ukraine. Last week, around 10,000 troops withdrew, which comprises around 10% of all capacities in the region. This is not a withdrawal of the army,” Mr Kuleba pointed out.

Dmytro Kuleba described the situation in Belarus as a security threat against Ukraine. “Ukraine has a border with Belarus and so, we are concerned about what is happening in the neighbouring country,” the minister observed. According to him, during meetings with the Lithuanian and Polish foreign ministers, Belarus was one of the most important topics. “It is crucial to learn to disregard Alexander Lukashenko’s rhetoric and take note of how his structures are weakening and he is beginning to lose his power,” Minister Kuleba stated.

Furthermore, the discussion also covered the Nord Stream 2 project: “While Nord Stream is an economic challenge for everyone, for us it is primarily a security challenge,” he explained. In terms of the position of the United States and its new President Joe Biden, the head of Ukrainian diplomacy remarked that on the one hand, the USA is observing the problem of Nord Stream 2, but on the other hand, it sees somewhat different ways to resolve it.

“Putin created this project, which has placed friends and enemies on different sides of the barricades. He achieved his goal,” Mr Kuleba pointed out. The minister stated that Ukraine exists in a “security vacuum” and so, some of the questions found on the agendas of Western states, including the Nord Stream 2 project, are viewed in Ukraine as potentially existential threats.

During the discussion, guests at the Eastern Europe Studies Centre were able to pose questions to the speaker. The recording of the discussion held at the EESC’s President Valdas Adamkus Conference Hall can be found on the 15min.lt, DELFI.lt and LRT news portals, as well as the EESC’s Facebook page.