New studies of the EESC China program – China in Central and Eastern Europe, Lithuania in the Asia-Pacific region, 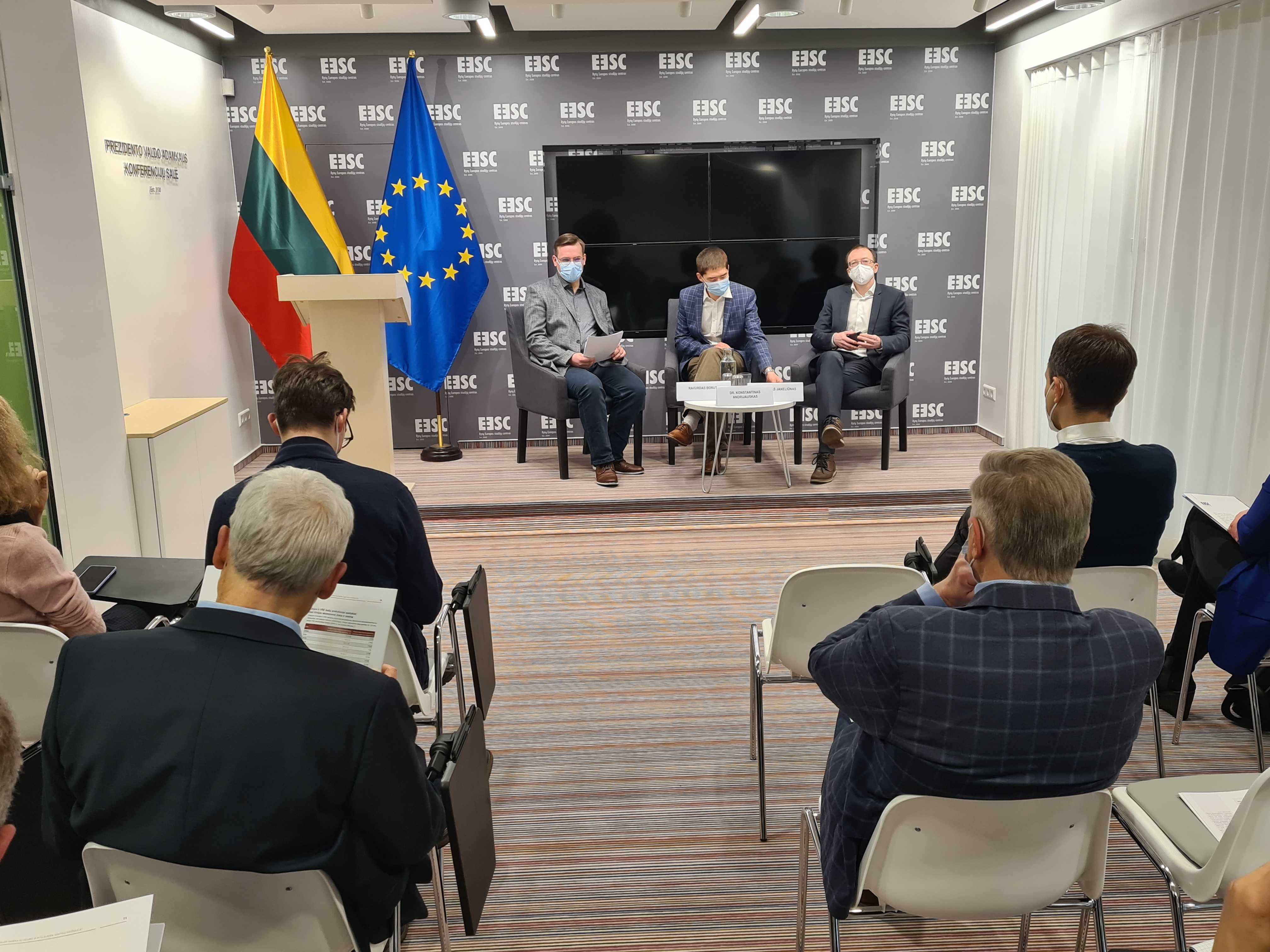 On December 3rd, the Eastern Europe Studies Centre (EESC) hosted a panel discussion to launch Raigirdas Boruta’s analytical publication “China’s Interaction with Central and Eastern Europe: at the Crossroads of Relations?” and Dr Konstantinas Andrijauskas’ analytical review “Opportunities for the diversification of Lithuanian foreign policy in the Asia-Pacific region: the attitude of new partners towards Russia”. The discussion was moderated by Dr Tomas Janeliūnas, Head of EESC Research Program, and featured the authors of the publications – Raigirdas Boruta and Dr Konstantinas Andrijauskas, Associate Experts of EESC’s China Research Program.

In his presentation on China’s interaction with Central Eastern Europe (CEE), Raigirdas Boruta stressed that this topic is of great importance and quite complex due to the high variability of information. According to the author, the development of relations and cooperation between China and the CEE countries has intensified since the beginning of the last decade with the establishment of the 16+1 format. Since then, however, cooperation has undergone a strong transformation. While China initially positioned itself at the centre of the format as an agenda-setter, there has been a willingness on the part of other countries to get involved in agenda-setting as well. The paper also looks at economic cooperation and the Belt and Road Initiative. Here, China’s pledges have sparked initial interest among countries, and the CEE countries have actively embraced the initiative, but the distribution of investment has been very uneven, with the focus shifting to countries that are friendlier to China itself, though Western countries remain the main recipients of investment. Cooperation has also highlighted the trade deficit and the heavy reliance on Chinese imports. The last part of the analytical paper tries to highlight the main challenges to the future of cooperation in the region, as well as the future of the format itself. According to Boruta, although the format is facing an existential crisis, the author does not think that China will abandon the idea. Although the pragmatic economic approach to China that prevailed in the European Union is somewhat changing, the CEE region is still heterogeneous, with divergent positions between countries.

In his analytical review of Lithuania’s foreign policy options in the Asia-Pacific region, Dr Andrijauskas, the author of the second publication, argued that because of the Chinese influence the region needs to be viewed as a whole. The paper discusses four countries where Lithuania has decided to establish representative offices – Australia, South Korea, Singapore and Taiwan – and how they view Russia. All the countries are similar in this regard, thus, in the author’s opinion, Lithuania’s policy towards them can be united. According to Dr Andrijauskas, the US sees Australia as a key country in containing China’s power, as evidenced by the recent security pact between the UK, the US and Australia. It is also with Australia that there is plenty of room for cooperation, as its attitude towards Russia is closest to Lithuania’s. Taiwan, South Korea and Singapore have an emphatically pragmatic approach to Russia, strongly linked to the economic dimension, but also with individual aspects. Nevertheless, all four countries view Russia as an important power, and the general recommendation for decision-makers is to emphasise the Russian threat narrative for these four countries both collectively and individually.

The discussion also included contributions from honorary guests. Lithuania’s Ambassador to China Diana Mickevičienė, speaking about the future of the 16+1 format, said that the next two years will be decisive, as everything will depend on China’s willingness to assess the problems of individual countries, as well as on the countries of the format preparation for the costs of withdrawal, which are quite significant. However, it is already clear that the shifts in relations are dramatic. Both in the West, in China, and in China’s neighbourhood, there is a sense of a loss of certainty, and Lithuania is at the forefront of these shifts.

When asked about the future trajectory of Chinese-Russian direct relations, both authors stressed that today the two countries are comfortable with cooperating. Dr Andrijauskas noted that today the roles of the two countries have been reversed, with China’s influence increasing significantly and Russia becoming China’s “little brother”, which is a new role for it. However, in Dr Andrijauskas’ opinion, although today is a golden age in the relations between the two countries, one should not forget China’s historical resentment or Russia’s own attempts to manipulate its rapprochement with China against Western countries. Raigirdas Boruta also noted the differences between the countries’ political establishment and their societies. Although China has no choice but to cooperate more closely with Russia, the societies of the two countries know little about each other and do not feel much mutual friendship.