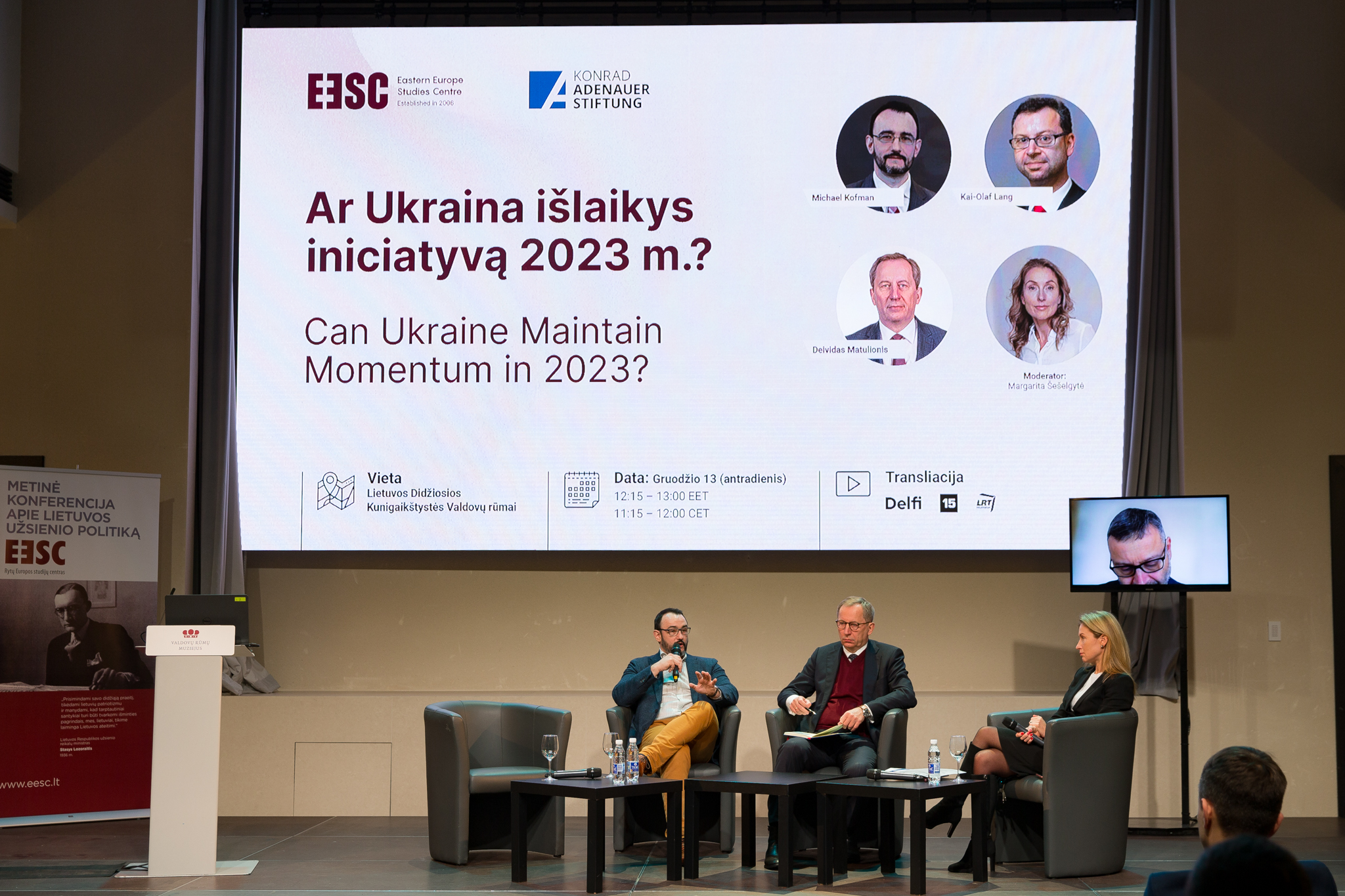 In the first panel of the conference, Mažvydas Jastramskis presented the latest EESC survey “Democracy Sustainability Barometer”. This was followed by a panel discussion on “How to win at the frontlines and at home. Sustainability of Democracy in Lithuania”, joined by Ainė Ramonaitė, Professor at the Institute of International Relations and Political Science, Vilnius University and Head of the Media and Democracy Programme, Vilnius Institute for Policy Analysis Donatas Puslys. The discussion was moderated by Tomas Janeliūnas, Chief Research Officer at EESC.

As the author of the study, Mr Jastramskis, pointed out, the need for this research did not arise by chance: “As you know, the world is witnessing a decline in civil and political institutions. In a nutshell, we could say that there is a struggle between democracies and authoritarian states. So we thought it would be useful to track people’s attitudes towards democracy and their willingness to uphold and defend it”.

The second part of the study was about the perception of the threats posed by Russia and China. “The overwhelming majority of Lithuanians agree that Russia is a direct threat and that we need more NATO troops. A majority also agrees that Lithuania must support Ukraine in every possible way. Lithuanians are somewhat more divided on the assessment of our diplomatic response to this threat. The perception of the economic narratives of Russian and Chinese propaganda is even worse – they penetrate into Lithuania, and the public resistance to them is not very high”, – said Mr Jastramskis.

The second panel of the conference, “Can Ukraine Maintain Momentum in 2023?”, featured Michael Kofman, Research Program Director in the Russia Studies Program at CNA, Kai-Olaf Lang, Senior Fellow at German Institute for International and Security Affairs, and Deividas Matulionis, Ambassador of Lithuania to NATO. The discussion was moderated by Margarita Šešelgytė, Director of the Institute of International Relations and Political Science, Vilnius University.

According to Mr Kofman, the current war scenario is going better than expected. “The scenario we are in right now is the best one which we could imagine at the beginning of the war. We see Russia loosing and Ukraine in full ability to defend itself. We see a huge Western policy shift to support it. But looking into the future, at least into the winter, the Russian strategy is to prolong the war and, in the meantime, restore their offensive potential. Also, as you see, they are hitting critical infrastructure to drain the population and the army by making them choose to defend either cities or the frontline,” said Mr Kofman.

“Ukraine still has the initiative, and on balance the war is still in many respects being driven by Ukraine. But they are very dependent on foreign support which is a drawback, because we see the problems with our logistics and supply,” Mr Kofman argued.